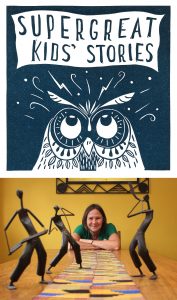 Welcome to Supergreat Kids’ Stories, fun tales to make you laugh and cry with some of the best storytellers from around the world, recommended for ages 5 to 105…

In this series we bring you ‘How and Why Stories’ which are stories which people made up years ago to explain how things like stars and mosquitos got into the world..and why things are the way they are.

Supergreat Kids’ Stories is a co-production between Wardour Studios and storyteller Kim Normanton.

Episode 2 – In this episode I’m going to tell you a story about how the mosquito became. Do you know, what a mosquito is? That’s right! It’s a little fly which buzzes and bites.. There are giants in this story. But don’t be scared, they’re only story giants. Are you ready? ‘mouth open, story jump out!’

Episode 3 – Would you eat the sky if you could? In this episode we’re going to hear a story told by Pamela Marre about a time when people did eat the sky. Pamela has always been surrounded by her Jewish family stories and she tells tells traditional stories from many cultures. Today her story is from Nigeria in West Africa about Why the Sky is Far Away.

Episode 4 – If you like snakes – you’ll like this story, so listen closely, because in this episode we’re going to hear from Tuup about a story from South America about why the rattle snake rattles and how snakes got their poison.’

Episode 5 – Have you ever seen a lion dance during Chinese new year? Well in this episode, the story which I’m going to tell you is ‘how the lion dance became.

Squanderlust is about the emotional side of money, why our actions aren’t always as good as our intentions. Martha and Alex talk about what it means to be good (or bad) with money and the emotional factors at play in financial decision-making

We write, produce and record a variety of original compositions. With our talented pool of composers we can create the right feel and mood for your project. Get in touch to find out more.

An unique audio drama written and produced for the NHS and the Royal College of Veterinary Surgeons to teach Vets vital vocational leadership skills.

With our restored and serviced Japanese Hara Matsusho 7” vinyl cutting lathe we can produce one off bespoke beautiful original cuttings of your project playable on any record player. We can also produce original artwork and packaging for small runs. Get in touch to find out more.

Wheel Suckers is brought to you by Alex Davis from cafe/bar/workshop Look mum no hands! and Jenni Gwiazdowski from the DIY bike workshop the London Bike Kitchen; They talk about the London cycling scene, bicycle culture and fun bike stuff.